Yes. You read right. I'm finally going to post about MD Sheep & Wool.
Three of us went. Me, my Mom & a friend, Melissa. Melissa's Mom was planning on going, but was sick that day, so she stayed home.
We left early enough that we could stop for breakfast. :-) Oh! And we went to the Sheep & Wool Festival on Sunday, instead of Saturday. I'll tell you what. Sunday is now my favorite day to attend the Sheep & Wool Festival!
Last year, we went on Saturday and there was so much that I missed! You see, I'm not fond of big crowds. If I have to fight through 40 people to get near enough to a stand to see what they have, I'll just walk on by until I come to a less crowded stand.

We walked into the Sheep & Wool Festival and looked at a few of the stands. Melissa was in the fairgrounds about 10 minutes when she came up with a great idea: we should go together on a spinning wheel. The wool fumes and sensory overload must have already taken over. You see, neither of us know how to spin. And, quite honestly, neither of us had spinning wheel money that day.

Our next stop was the MDS&W merchandise building. Last year I'm sure we waited in that line for over an hour. This year, it was a short line, and we spent maybe a half hour in line. The kind people in line behind us took a picture of us. Notice that Melissa thinks she's funny... 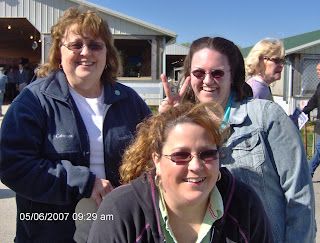 After we got our MDS&W merchandise, we stopped at The Fold's stand. There was still Socks That Rock yarn - as well as other yarn from Blue Moon Fiber Arts. It was tough deciding what to get - and I'm sure all three of us could have spent all of our money at just that stand!

The weather was nice this year. It was windy & a little on the cool side, but I'd rather have it cool when I'm going to be walking around. Last year was very warm & I thought I was going to pass out when I got to the center of the large exhibit hall.

Eventually, we took a little break from the fiber & went outside to get some fries and drinks. We sat outside to rest and eat and drink...and we also took pictures of our goodies so far.
Here's my Mom with her Trekking yarn. She decided that she wants to knit some socks. 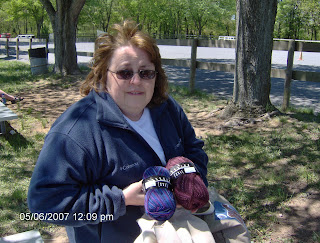 Here's Melissa with her stash. She has some Blue Moon Fiber Arts yarn around her neck, is holding more yarn and...some roving.

Meet her Jacob. She & I both bought 4oz. of Jacob roving from Tannery Spring. Why? Well, because of the pretty colors and it's sooo soft! I know we don't spin! And no, we did not get a spinning wheel.

After we bought our Jacobs, we went into the main building. In there, we saw that Interweave Press had a stand (something I totally missed last year!). I renewed my Knits subscription and was talking to the lady who was waiting on me. It turns out that she was none other than Amy Clarke Moore, editor of Spin Off magazine! When I mentioned to Amy that Melissa & I both purchased this Jacob roving, but don't know how to spin, she promptly pulled out two cd drop spindle kits for us (she's such an enabler). So, now we have the means to spin our Jacob roving!

I have already played with my drop spindle. I've "spun" the fiber that was included in the kit. I'll save those pictures for another day. I'll just tell you that my spun fiber is...interesting. 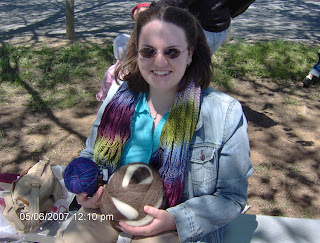 Here I am with my goodies...see my Jacob?? Oh! And for renewing my subscription at the festival, I could pick a free magazine, so I picked Spin Off. 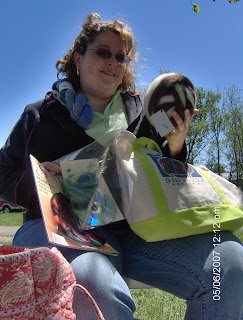 My Mom decided to have fun with the camera. She went a little crazy, taking pictures of me & Melissa, while we drooled and walked around with our mouths hanging open. 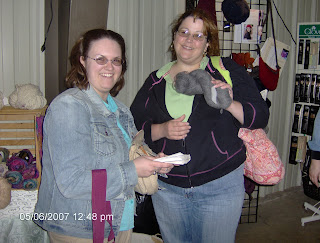 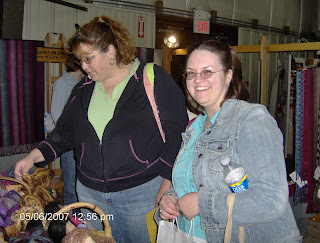 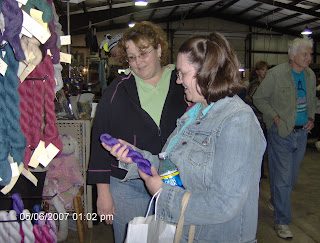 Then Melissa took the camera, and she took some animal pictures... 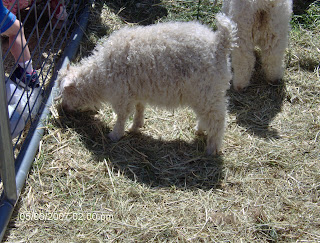 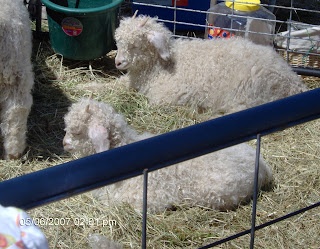 Now on to the pictures of my goodies...

This is Peace Fleece. 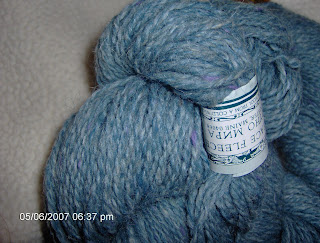 Here are some buttons I bought. 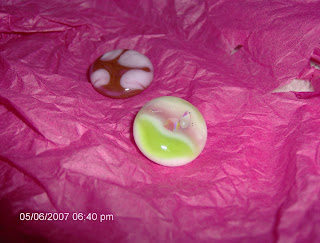 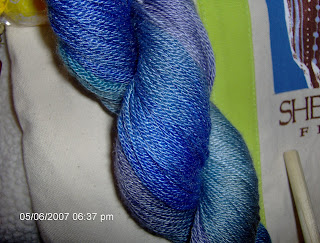 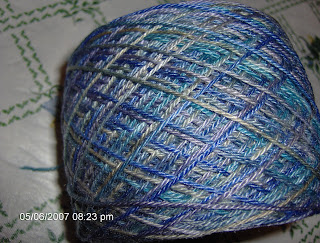 Some yarn from Blue Moon Fiber Arts. Don't ask me what yarn this is. I can't seem to find the ball band. I swear I have every ball band from every yarn I've ever used - I just can't find this one! But this yarn is soooo...nice! I'm not sure what I want to make with it, but I had to purchase it. I'm sure you understand.

That's all for now. Yes, I still have some fo's to show you...as well as the result of my spinning.

Posted by AngeliasKnitting at 3:50 PM

Oh my oh my that's some nice yarn there;)

Looks like much fun was had. I do think Sunday's tend to be better at the festivals. So many people are already heading home it becomes way more manageable crowd-wise.

Hi there lady, Hope you are well.
Those festivals can be a dangerous places, but they are so much fun. I am already saving up for Rhinebeck.

Everyone's spinning is interesting at first. Then you get good at it and heaven help you if you actually *want* to make the lumpy bumpy stuff, because you can't do it. I'm very impressed that you learned to spin on a CD drop spindle, though: the spindle is harder than the wheel, and the CD spindle is especially challenging.

Thanks for showing me around -- I enjoyed it a lot, as I hadn't been on a virtual MD tour in over a month :).