Done (I know, I know...but I couldn't think of another "D" thing)!! I am done with my mittens. I finished them Monday. I knit another left hand mitten & then knit the right hand. That first mitten I knit? I'm calling that my "test"

mitten - see the picture below. I've been wearing the mittens all week. They keep my fingers nice & toasty. Now the Queen Princess wants a pair...just like mine. I think I have enough yarn to mak

e her a pair (after all, her hands are smaller than mine!).

Tuesday night I cast on for Odessa. I knit. Had to stop for supper. Knit some more. Had to stop to get the Queen Princess to bed. Once she was in bed, I knit some more. Then, finally, I had to stop because, well, it was 1AM...and my alarm goes off at 6AM.

Yesterday I met with a new customer. The woman was pregnant with her 3rd child, due any time, and she wanted to meet with me to try on makeup & skin care products! She was having contractions during our consultation. She had her baby last night. :-) As luck would have it, by the time I was finished with her, it was time for the Queen Princess to get home from school (I meet her at her bus stop). Then she needed help with her homework. Then we went to eat (we eat out on Wednesdays & then go to Nutty Knitters). I did knit a little of Odessa while I was waiting for the food. After supper, Nutty Knitters. I made a deal with myself that at Nutty Knitters, I can only knit a Prayer Shawl...so that means no Odessa knitting. I didn't have a chance to knit any more of Odessa last night.

This morning I helped out in the Queen Princess' class and then came home and did some work (rather than read knitting blogs all morning!). Tonight's Brownies...so sometime this afternoon, I need to knit Odessa!!

If you haven't knit this hat, try it. It is such an awesome pattern (I was pr 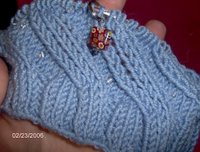 aising Grumperina and her wonderful pattern creating skills last night to all the Nutty Knitters - she's a genius; a knitting Goddess)! I love, love, LOVE knitting those beads on! I'm so amazed (with each and every bead) that it WORKS! After each row, I stop and look at the knitting. The p 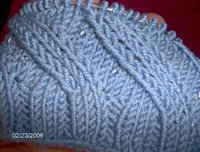 attern! It's amazing!! What's even more amazing is that while the hat looks very elaborate and complicated, it's a very simple pattern (even I can remember the pattern!). When I bought the beads, I wanted to make sure I had enough, I now realize that I have enough beads to make 3 or 4 Odessa's! :-) **see that stitch marker on Odessa? That's one of the ones my SP sent me. Isn't it beautiful? It makes knitting more fun! And see the beads?!? They make knitting more fun, too!

In other news...Blue Moon Fiber Arts (home of the Socks That Rock yarn) now have a Sock Club! Go here to learn more. I learned this from Cara's blog - you know she has connections at Blue Moon!

Also, go here to welcome Maribel to blogdom. She recently started her own blog (she claims it was peer-pressure from me & Nancy - whatever!).

Guess what??? I got mail today!!! Mail from my Secret Pal!!! I'm not going to tell you what I got (in this post). I'll show you some pictures & let you guess. I will tell you that my SP is so awesome! Do you know that she's (very) pregnant, having contractions and actually may have already had that baby?!? **I heard from my SP since I wrote this. The baby has not arrived yet.**And still, she makes sure that I get my gifts! Isn't she gonna be a great mom?!?!? 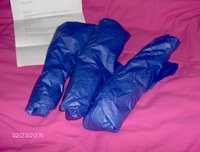 . It's a knitting book. I opened my SP gift and played with it until it was time to go to the bus stop to get the Queen Princess. On the way home, I realized that I completely forgot about the book!

The white box was inside the Priority Mail box. Inside the white box, I found a letter (ok - the letter was attached to the outside of the white box) & the 3 blue packages. Any guesses??

That's enough for today. MAKE it a great day!
Posted by AngeliasKnitting at 12:34 PM

I'm dying to do Odessa. I think it will be the project I take to Iceland.

Hey lady..how do I become a secret pal? Love the mittens...

That was a great solution to D. Good job. The mittens look great too.
I just love your Odessa. What size beads are you using? Here we have mm sizing so I don't know what to get. The ones I have are quite small-I think 8mm. Yours looks super so far!

Nice mitten work! I have no idea what's in that package, except maybe... corn dogs?

Hi.. thanks for the link... she does nice work!! I've also checked out the Odessa pattern and I will have to practice the yo's and ssk end of things, hope I can do it! The mittens are great!!