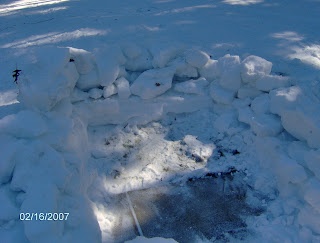 Then came the freezing rain. About 3 inches of it. On top of the snow.

Then it snowed some more and there was also sleet. Schools were closed on Wednesday (Valentine's Day). It kept snowing.

The temperature dropped (to less than 20 degrees - usually around 16 degrees, with a wind chill of negative numbers). The snow finally stopped (maybe Wednesday night). Schools ended up being closed all week. Two of the major highways had major problems and were closed. There was even part of a day that a section of the PA Turnpike was closed due to a wreck.

It was crazy. So we stayed home. We played in the snow. We shoveled the icy snow. I took alot of Advil (I basically was shoveling boulders - icy snow boulders!).

The picture above shows the start of a fort/igloo thing for the QP. That's as far as it got. 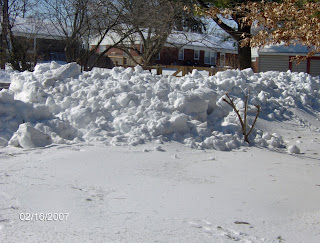 This picture shows the "mountains" (as the QP & the two neighbor girls called them) that were formed by the snowplow plowing the parking lot of the church that's next door to us. 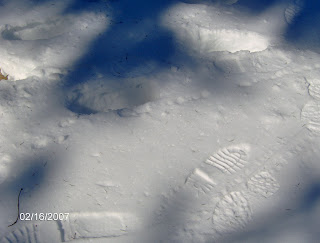 See those deep footprints? I made those Tuesday or Wednesday, when I walked through the snow. See those footprints that are barely there? Those are the ones I made the day I took these pictures (it was so cold that you could walk on top of the snow - it was all frozen). 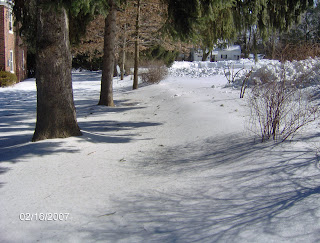 A picture of the side yard. You can see the "mountains" (on the right hand side of the picture)that are alongside the church parking lot. 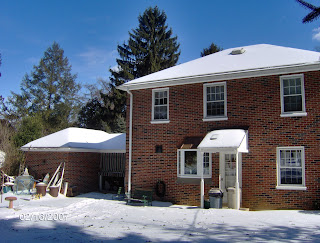 The house. This picture is the view of the back of the house. 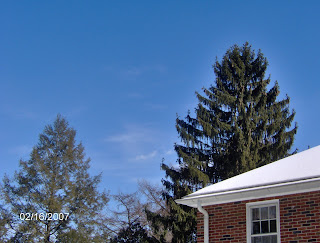 It's hard to believe that the sky was this blue and this pretty but the temperature was below 20 degrees!
Because of the cold temperatures and the ice on top of the snow, road crews had a tough time clearing the roads. The city of Lancaster had these awful, bumpy, ice chunk covered streets. It was actually easier to get around on the "country" roads than it was to drive on the city streets (which is unusual).
The QP finally went back to school on Tuesday (they had off for President's Day). This made us both happy. :-)
Yesterday, the temperature was almost up to 50 degrees - so there was alot of melting snow. Today it was pretty warm, too - in the mid 40's. That helped out alot with the city streets. We can no longer walk on top of the snow - the snow's pretty slushy.
MAKE it a great day!


Posted by AngeliasKnitting at 5:51 PM