Where did the time go?

It's been over a month since I posted anything! Can you believe it?? To my one reader that's left, I'm still alive! :-)

I've been knitting. I've even taken some blog pictures. But then I don't get them loaded and too much time goes by, and before you know it, it's been over a month!

Here's a brief rundown of the last month: 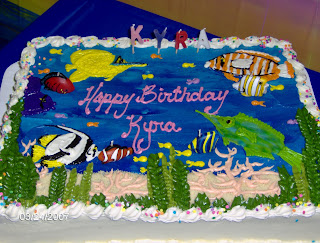 * I had a throat infection, and then had an allergic reaction to the anitbiotic. The rash still is not gone.

*The QP started playing TeeBall. Her 1st practice was last week. She likes it, and says her coach is awesome. I volunteered to be a Team Parent. The TeeBall glove the QP got is "signed" by Derek Jeter. She thinks he's going to come see one of her TeeBall games. :-)
* Right now, I'm busy knitting things for the auction at the QP's school the first weekend in May.

Tomorrow, me, my Mom & two of the women from my church knitting group (the Nutty Knitters) are having a field trip. We're going to this store. If you're ever within a two hour drive of this store, you have to go! It's incredible!

A few weeks ago, my Mom decided to knit a hoodie for the baby of one of her co-workers. She found a pattern she liked, which called for Lion Brand MicroSpun yarn (the yarn she wanted to use for the hoodie). 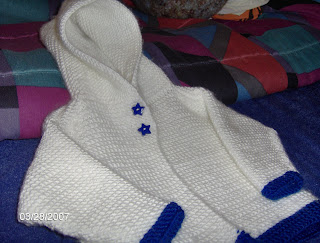 This was her first sweater. It was also her first time knitting in the round with two circular needles. She did that rather than knit the sleeves flat & then seam them. 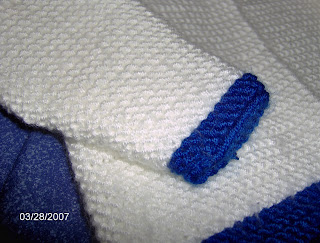 She finished it and last night, we went to one of our local yarn shops (which does not have a website) to get the buttons. Aren't they cute? And the blue is almost the exact same shade of blue as the yarn. 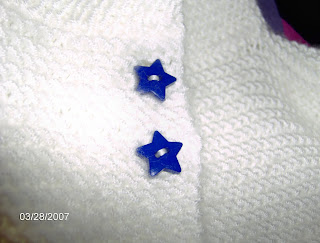 She gave the hoodie to her co-worker today. I can't wait to see how it looks on the baby!

Posted by AngeliasKnitting at 2:51 PM

Sorry to hear you've been sick. I hope you recover from the antibiotic allergy! I had a similiar thing happen. It's no fun.
Happy Birthday to QP!
The sweater is lovely and the buttons really make it something special.
I can't wait to hear about your field trip!
Karen
http://nothingbutknit.blog-city.com/

Sorry you've been sick but it's about damn time you blogged;)


The sweater is beautiful, tell mom she did good!

Your mom is freakin' brilliant.