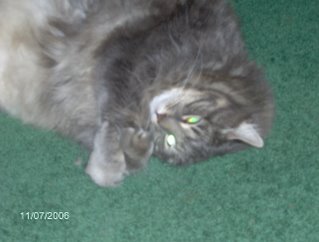 This is Smokey the Cat (that's his full name). I call him "cute cat" when he's doing things like this (he likes to be called cute cat). I haven't figured out how to take pictures of him in the house without making his eyes glow-y. Anyway, this "pose" was too cute! He had one paw up to his face & the other curled up. He often lays on his back like this, once the QP's in bed. He's 8 years old. 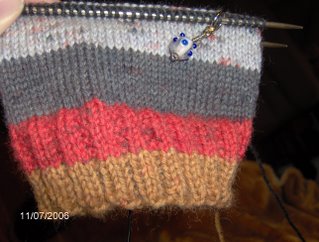 Here's my Socktoberfest sock. The broken finger really cut down on my knitting (and blogging!) time. I decided that I really didn't like how the stripes were looking so.... 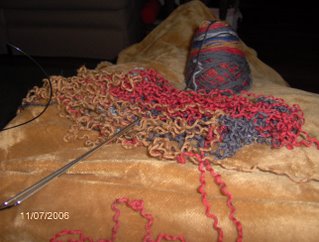 I frogged the sock. I did re-start it, I just haven't taken any pictures yet. I like the new pattern I'm doing much better!
In finger news, I saw my family doctor for a follow-up visit. She referred me to an orthopedic doctor. I saw him this past Thursday. He said that I no longer have to wear the splint, but still have to keep the finger taped. It's taped to my ring finger. He said these things usually take 6-8 weeks to heal. I can start moving it, but can't do anything major with it (like lifting weights). Thursday I knit my sock for several hours (with the splint on, I could knit one, maybe two rows and then my hand hurt too much). Friday, my finger was pretty sore. I can feel it when I've been knitting too much/too long. The finger's still swollen, but doesn't hurt as much as it did at first.
Yesterday the QP, my Mom & I went to one of the local alpaca farms. They were having an open house. The weather was perfect. Here's what we saw: 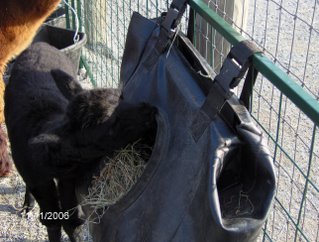 This baby was chewing/licking the opening to the feed bag. 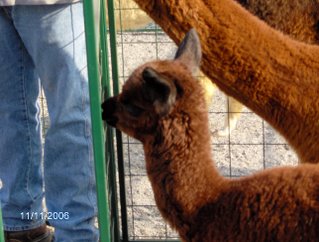 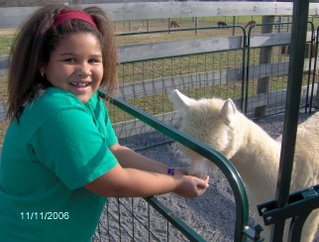 The QP had to feed an alpaca, first thing. She said it tickled her hand. 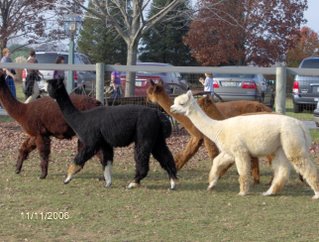 The alpacas tend to move in a herd. It is an amazing thing to watch. The farm has over 60 alpacas. 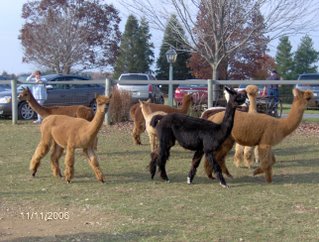 Here they are, moving in the other direction. See the many shades/colors? They are beautiful! 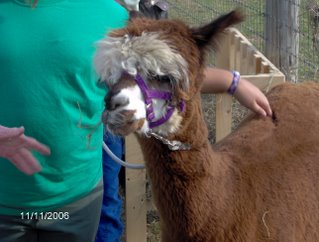 I liked this one, with it's white forehead. It is owned by a boy who's in the 4-H club. He boards the alpaca at this farm. 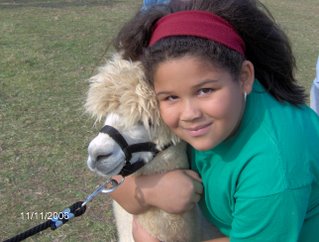 The QP got to hug many alpacas! 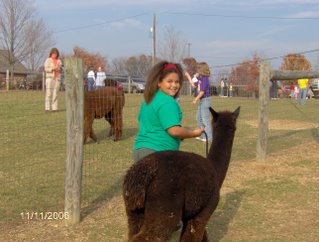 After we were there a while, she got the chance to walk one around. Her name is Samantha. 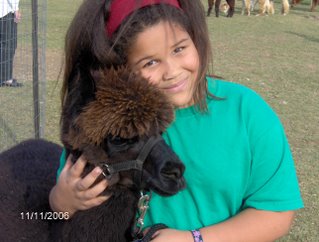 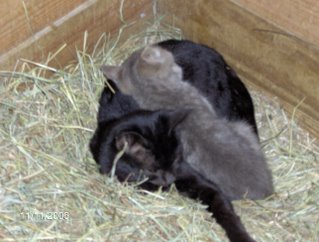 And there were free kittens. No. We did NOT bring one home! Smokey would NOT like another cat in his house, sharing his people!
The open house was today, too. I'm glad we went yesterday, because it rained and was cold today!
Oh! The farm also has a store that's open year-round!! They sell sweaters, hats, gloves/mittens, scarves, shawls, stuffed toys , yarn and wool to spin!!!! The prices are reasonable. I WILL be returning to purchase some yarn!
MAKE it a great day!

Posted by AngeliasKnitting at 11:24 PM

QP looks so cute hugging the alpaca. Would Smokey mind if you brought one of those home??
I had hoped your finger would heal quickly. Sorry it's going to be so long.
Karen
http://nothingbutknit.blog-city.com/

Smokey looks like our Fluffy (a name we did not give her!), only less irritable. I love alpacas, especially when they're in their own place and not freaked out.

Found your blog through Dave - just had to leave a post because your Smokey is a dead-ringer for my most wonderful but, sadly, late cat Cello. He was a super fluffy long haired silver tabby, often mistaken for a Maine Coon. We miss him! Those are some fabulous alpaca photos (they always srike me as something out of Star Wars!). Best of luck with the finger healing process. ~gabriella

Oh you poor thing-I hope that finger gets better soon! Where is that alpaca farm?? Too cool. I wish we had something like that around here.

Here's to a speedy recovery. I love all the pictures.

Blast that finger for keeping you away from the keyboard so long! I am so jealous of the QP hugging all those sweet alpacas. I want to hug them, too! And I want to hug Smokey... would he permit that?

Those alpaca's are sure cute, makes one want to take one home. (Your own source of yarn..)
Those new kitties were cute also.
I love kitties...

Hope your hand is getting
stronger...