I finished something! Woo-hoo! Well, it was supposed to be a Christmas present for my Dad - but it wasn't finished until last night. I may still give it to him as a belated gift.

I started it in plenty of time but then, well, Christmas stuff got in the way. Shopping, wrapping, cooking , preparing 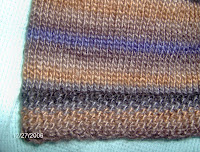 , etc. Somehow, the time got away from me & all of a sudden, it was Christmas morning & I'd only knit about 2 inches of the hat (at this point, I realized that there was NO WAY I would have it finished to give to him on Christmas).

So, after the presents were opened Christmas morning (and all of the QP's toy 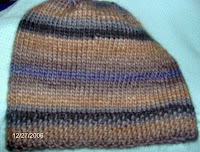 s were taken out of the packaging - which is ANOTHER story!), I picked up the hat & knit. Christmas evening, we went to my cousin's house for our family get-together. I knit while I was there. Last night, I knit while watching tv. And then the hat was finished. I really like the pattern - very simple & quick & a great "guy" hat.

The pattern is one that I found, & printed , not long after I started 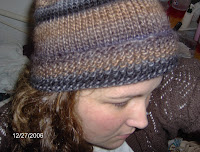 knitting. It's called the Late Christmas Hat (hehe!). I used size 7 KnitPicks Options circular needles (one for the body of the hat, and then two needles once the decreases started). The yarn is Patons SWS (soy wool stripes), in "Natural Navy".

The yarn is kind of fuzzy, so I'm not sure I'll like how it looks after the hat's been worn. We'll see. It feels silky & smooth. I love the colors. I bought some of this yarn (in a different color) a few months ago, to make mittens for the QP. I made one mitten & then ripped it out because I had the thumb in the wrong place. I may make her a hat out of her SWS yarn, instead of the mittens. She was enjoying wearing this hat today (I think she just likes to take things from my room - shoes, yarn, knitted items, etc). **despite how the hat looks in that one picture, it's not lopsided at the top - that just shows my lack of photography skills today. :-)

Is anyone doing a New Year's finish up some of your wip's kind of knit along???? (just asking - because I'm thinking that I really should finish some things I have on the needles - and I know I can't be the only one!)

Posted by AngeliasKnitting at 2:47 PM

You wouldn't be implying that I might have a lot of WIPs, would you? Because that just couldn't be me.

I could have used one of those clean up your WIP knit alongs.

I still have holiday gifts that I haven't finished!

I like the hat, I still have to make one myself, and now that it is getting colder here I better hurry.

Have a great New Year !

This hat is absolutely lovely, I love the colours!
Happy New Year, and all the best to you and your family!