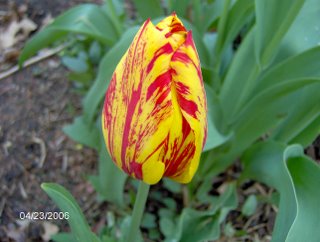 Yes. More garden pictures. You can never see too many flower pictures, right? I'm amazed at how the gardens change every day. Now that we've had rain, thing'll really start growing. 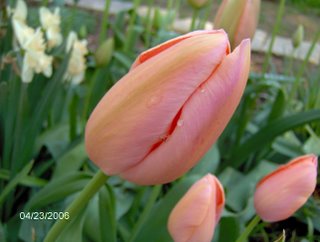 I just love pictures of flowers with raindrops on them! 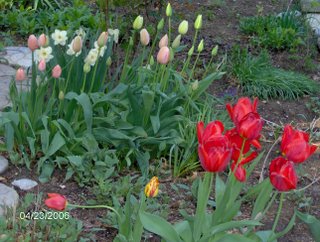 Here's a view of the garden. You'll notice the red tulips I took pictures of (last week?). Just since I took these pictures (on Sunday), the pink and light yellow tulips are open. 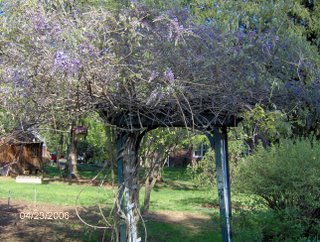 Here's the wisteria. It's starting to get flowers. When it's in full bloom, you'll wonder how that thing it's growing on (sorry - can't think of what it's called) stays standing! 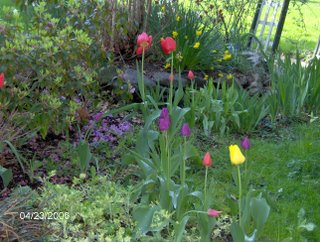 Here's a front view of the "way back" garden. This is beside the wisteria. We call this garden "Tabitha's Garden". Tabitha was our cat. She had to be put to sleep several years ago (old age; her kidneys were giving out). There's a stepping stone in this garden that lists her name & birth & death dates. 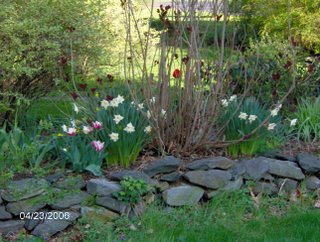 Here's the back view of Tabitha's Garden.

Sunday I was outside taking pictures.

Early Monday morning (4AM - yes, I keep track of these things) I woke up with an intestinal flu (at least, that's what I think it was). Vomiting and diahhria (never can spell that word!) every hour for 11 hours. Talk about fun. Vomiting is my least favorite thing to do. I mean, I never get drunk because I don't like to vomit.

Thankfully, my Dad got the QP to school, picked her up from the busstop, after school and got supper for her. I slept (in between trips to the bathroom) all day. When it finally stopped, I waited another 3 hours til I tried ice chips. I was soooo thirsty by this time. Oh! And I was running a fever all day. Teeth - chattering, shivering cold. The kind of cold you can't get warm from because it's inside you.

Luckily the QP is not really young. I laid on a futon in the living room (with 2 shawls, 2 throw-sized blankets, 2 bed-sized blankets (one of them, wool) and a sweatshirt jacket on - and I was still cold!) and dozed in & out while the QP watched TV til it was time for her to go to bed. I don't know what I would have done if she were younger & needed more attention. I was so weak and tired. I don't remember ever feeling as bad as I did yesterday. I usually don't get these kinds of things. I have allergies & tend to get sinus infections, but never get colds and rarely the flu. The last time I had the flu was 17 years ago! And when I went to bed last night, I had this terrible headache. I woke up every hour or so, all night.

Today I feel better. I ate today, and have been trying to replenish fluids. But now I hurt. My whole abdominal area hurts, my throat hurts, when I take a deep breath it hurts, and my head still hurts, off and on. And I still feel weak & tired.

So, while all that was going on, I missed alot of stuff, here in Blogland. Here are a few of the things I missed.

Scout had a Colorway Contest - it's ok - I don't win contests, anyway!

Carole had pictures of an event at Classic Yarns in Grafton.

Franklin talked about his dreams and Dolores mentioned purchasing a bikini.

Dave showed some awesome pictures of Boston & also of his hand-dyed yarn.

Posted by AngeliasKnitting at 10:14 PM

Those are gorgeous flowers. Lucky you!

Your gardens are gorgeous - what a lot of work to keep them looking so great. I hope you feel better today!

Holy mackerel - I'm glad you're on the mend!

These photos are sooo beautiful, I enjoyed it so much to just look at them - and envying you a bit for your beautiful garden! :)
I'm so sorry to hear about you having been sick - I do hope that all this is all gone and forgotten by now and you're feeling 100% well again!