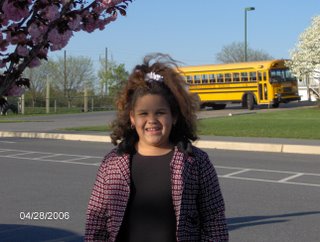 Friday night, the Queen Princess was in the Spring Program at her school. This program was put on by grades K-2 (she's in 1st grade). It was a musical. They did the program at a school assembly Friday afternoon, and then Friday evening for parents, grandparents, etc. She was so excited Friday night! She talked the entire way to the school. Here she is, ready to go into the school. 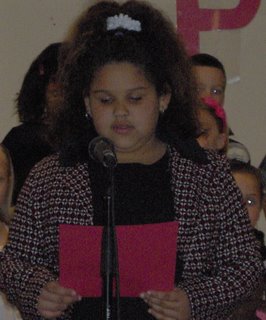 She had a reading part (only two children from her class had reading parts). She did very well. She loves to read and reads with expression. 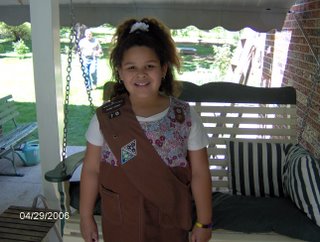 Saturday, the QP's Brownie troop was in Lancaster's American Spirit Parade. We were part of a group of 6 troops (1 Daisy, 2 Brownie, 2 Junior, and 1 Cadette). 6 or 7 girls from the QP's troop participated. I walked alongside the troop, pulling a wagon containing a cooler, the first aid kit & jackets. For those of you familiar with Lancaster, we lined up for the parade behind the prison (the actual parade start was the YWCA - there were ALOT of groups in the parade!), and we walked to Buchanan Park (close to F&M College). 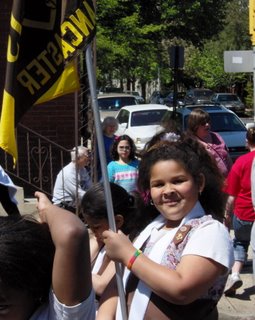 The parade was fun, but long. Luckily, we weren't walking non-stop. We met at noon. The parade was to start at 1PM. We actually started moving at 1:30. We finished around 3:45. There were alot of groups signed up this year, plus we were walking through the city (so the parade would stop every so often to let vehicle traffic through the cross streets). The weather was beautiful. Warm, but not too warm. Sunny & clear. There was a little bit of wind. The girls did a great job. We walked at least 2 1/2 miles. They hardly complained.

Sunday afternoon/evening, there was a Girl Scout Roller Skating event (which was rescheduled from February). The QP doesn't know how to skate very well. I don't skate at all. She had fun, though. People who are learning to skate can go to the center of the rink. She spent most of the time out there, with one of her friends.

A busy weekend. I managed to do a little knitting yesterday afternoon. I'm workign on finishing the scarf/hat sets for the auction at the QP's school (in a few weeks).

Oh! I updated the Nutty Knitters blog with some shawl pictures.

Posted by AngeliasKnitting at 11:20 AM

I love the pics of Queen Princess, she's such a cutie - and congrats to her for doing so well with her reading and at the parade! I used to be a Girl Scout as well when I was about 10 - I didn't last long but sure had a fun time there!
Oh, I love the shawl pics you posted on the Nutty Knitters blog, they're amazingly beautiful!

she is a cutie! I remember the scouting days with my girls ---- I was a leader for both of their troops, those were fun times!