Where does the time go?? 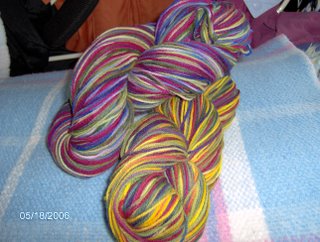 It's been a week since I dyed this yarn! Here (finally!) are the rest of the pictures of it. These are the two skeins I dyed. I used the same colors of dye but look at how different they turned out. 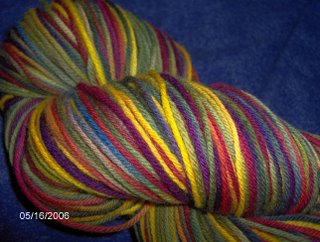 The first skein. This one reminds me of harvest colors. I like the richness of the colors (I don't care for pastels - I like bold colors). 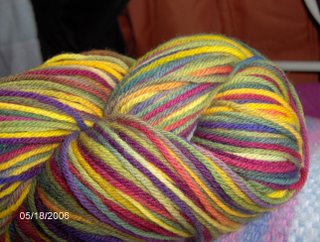 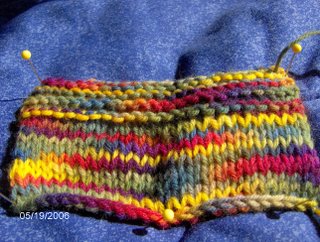 Here it is, knit. I don't love it. I think there are too many colors - or maybe I just don't like varigated yarn - or there's too much green. I don't know. I just know that I don't love it once it's knit. 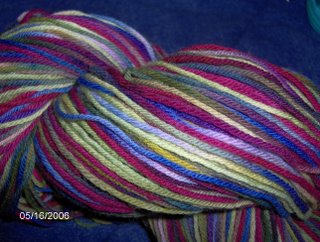 The second skein. I only had a little yellow left in my squeeze bottle. Instead of having sections that were just yellow, I mixed it with the blue and with the red. I really like the colors in this skein. They remind me of sherbet (except for the blue part) or of a flower (leaves & all). 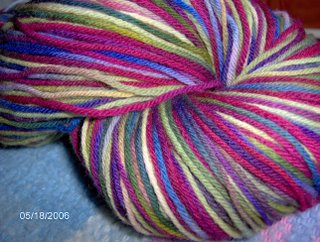 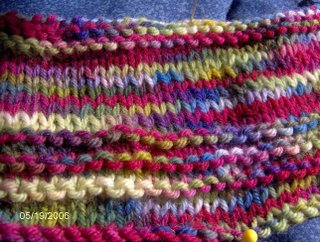 Here's the second skein, knit. I like it better than the 1st one - but still don't love it. Again, I think I just need to use fewer colors. Picking one or two colors is really hard for me - that's why I end up with this yarn of every color! Oh well. That's why these were my practice yarns!

Friday was the chicken bbq at the QP's school. The kids had an early dismissal - they were done at 11AM. Because this is the school's biggest fundraiser, 100% family participation is expected (that means that parents are expected to volunteer their time and to donate things). I donated 2 scarf & hat sets, 2 "spa" baskets, a felted knit bag & helped at the "Sweets & Treats" stand from 11-2. In case you don't know - that's the baked goods stand. We had all kinds of yummy things to sell! I made chocolate chip cookies and whoopie pies (to donate to be sold).

Today, the school held a "country breakfast", a candy drop (a small plane from a local airport flew over & dropped candy out for the kids), a "country auction", and food (fresh sausage sandwiches, hot dogs, pork bar-b-que (which is not the same thing as the chicken bbq - the pork is similar to sloppy joes), french fries (the fresh cut kind), cotton candy, popcorn, ice cream and baked goods. They also had a bouncy castle ( you know - those inflated castles that the kids can jump in) and a clown making balloon creations for the kids. The QP and I spent several hours at her school today.

I had every intention of posting earlier in the week - but then the days just got away from me - and before I knew it, it was Saturday night! I don't think I even turned my computer on after Thursday afternoon!

Enjoy what's left of the weekend and remember to MAKE it a great day!

Posted by AngeliasKnitting at 9:52 PM

I love your dyed yarn but like you said once it's knit up, there are too many colors. I'm not a fan of varigated yarn either. Lesson learned, right? I can't wait to see what comes next.

I absolutely love your yarn and think it looks so beautiful knitted up - but then again I'm a true color maniac and can't have enough of them! I agree, if you're not that much into a whole lot of different colors at once, then it might be a bit too much - lesson learned and done differently the next time, right?
Ahhh, these Whoopie pies sound like paradise to me, especially right now on a Sunday morning when I have nothing sweet here to munch along with my morning coffee - can I come over? :)

I'm liking the colors together. One thing I've found with swatching, that doesn't give you much. If you are going to make socks, the "repeat" or sequence of the colors will be different in the round than in the swatch. You might find that it tends to strip more in the finished item. Don't give up hope yet.

You are amazing, I loved the colors. I agree with you about the pastel thing but you might want to knit up a larger swatch, it might make a difference. Great job!

Your yarn looks great! I love the bright colors.
The activities/fundraiser at your daughter's school sound like so much fun. It nice they do things to foster a community feeling.
Karen
http://nothingbutknit.blog-city.com/