Hi! My name is Angelia - and this is my knitting blog. I live in Pennsylvania and have a 7-year old daughter. I call her the Queen Princess - or QP, for short.

I thought I'd introduce myself, since it's been so long since I posted anything. Why haven't I posted? I don't know. Every time I thought about doing it, I realized I really didn't have anything to say - and didn't even have any pictures to post.

I've been doing a little knitting. Not much.

The Nutty Knitters are meeting again (we had a summer break), so at least once a week I'm knitting a prayer shawl. I curre 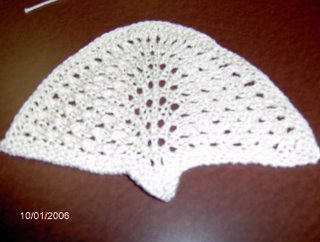 ntly have two on the needles.

One of the women in the Nutty Knitters does Civil War re-enactments. She's currently working on a knitted Shell Counterpane. You knit the individual shells & then sew them together to make the counterpane. I'm helping her with the knitting. This is a picture of the first shell I knit & blocked. I like the pattern. It looks very cool when put together, and the s 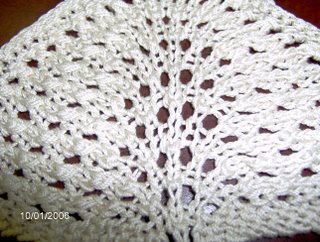 hell knit up fast. Luckily, I won't be the one sewing the things together!!

I have also been attending the weekly SnB meetings. It's a fun group. My Mom & I go to SnB while the Queen Princess is at her Brownie Girl Scout meeting. One of the SnB'ers, Heather, recently started her own blog.

((I had this post written & somehow it got lost. So now I have to try to remember what I wrote. Plus, I just saw on the news that a gunman held some Amish kids hostage at their school - TODAY. That's some crazy shit! The Amish are pacifists. And here a gunman comes in & holds school kids hostage! He shot himself before the rescue people could get into the school - damn coward!))

Almost three weeks ago (it'll be three weeks on Wednesday), I joined a fitness club. I had received a free week's pass & went there to check it out. I ended up joining. I've been there every day (Mon-Fri) & two Saturdays (when the QP had a playdate & I had "free" time). I've also signed up for a personal trainer. I call him Killer. I'm convinced he's trying to kill me! I meet with him once a week. He pushes me to work harder than I would if I were on my own (plus he knows ways to use the weight machines that are especially painful - and, I guess, effective - but painful). 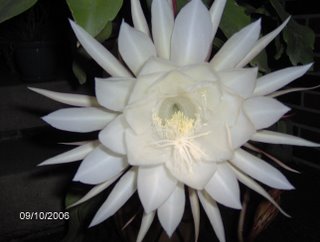 I'll leave you with a picture of a flower. I don't know the name of the flower, but this particular plant used to belong to my Great-great Grandmother. The flowers only bloom at night, and they only bloom once. The next morning, the flower is drooping & closed. I love how they look - and they smell nice, too.

That's all for today. Now I'm off to see if I can find out some more info on the Amish school shooting. I can't even express how crazy that (the shooting) is!

MAKE it a great day!
Posted by AngeliasKnitting at 11:28 AM

How many shells in a counterpane?

Yay, glad to see you post again. The shell pattern is very pretty.
And, speaking of prety, that flower is something else. I can't believe how it's survived so long! That's great. And such beautiful flowers. It's amazing.

Nice to see you back! The counterpane is lovely.
How does QP like school? Second grade seems so grown up compared to first. Is she enjoying Brownies?
The flower is stunning. I have never seen anything like it.
You are doing great working out! My husband and I have been walking every day and eating well.
The shooting was tragic. I can't imagine how scary for the kids. My thoughts are with the community.
Karen
http://nothingbutknit.blog-city.com/