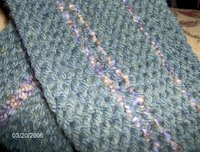 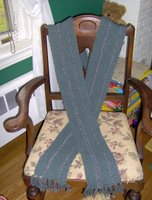 These are pictures of my 9'10" scarf - some of the scarf is hanging down the back of the chair. I'm going to make several of these (no, not as long as this one!) to donate to an auction (fundraiser) at the Queen Princess' school. Every year the school has a Chicken BBQ/Country Auction fundraiser. It is their biggest fundraiser.

For those of you not from Lancaster County, the bar-b-qued chicken they make here is unlike any I've found anywhere else. They don't use a barbeque sauce - they use vinegar (and I think) salt water.

Chicken barbeques are very common in Lancaster County. The fire companies usually have them (our fire departments are all volunteer, so they have fundraisers). Some churches also have them. And I've seen at least one Boy Scout troop that had one. You can buy the chicken (usually half a chicken) or buy a dinner. The dinner is usually a small carton of something to drink (like Turkey Hill iced tea - which alot of Lancastrians swear is the best iced tea), chicken, a baked potato, a roll, butter, cole slaw (usually Pepper Slaw- also called Pepper Cabbage - which is not the creamy kind of cole slaw) and a dessert (cupcake or brownie).

But you didn't come here for a Lancaster County food history lesson, did you? You came for knitting pictures. Here are some more. 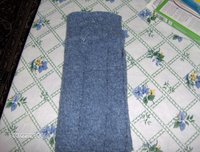 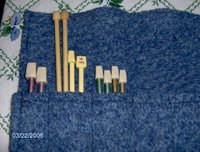 This is the felted needle case. I used Paton Classic Merino yarn. The true color shows up best in the bottom left picture. That was taken right under a lamp. The picture on the top left was taken on the dining room table (the light's not as good 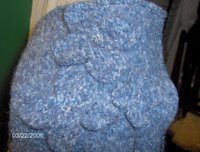 there). The pattern is a free one from Paton's. There are three flowers - bottom right picture - on the outside of the case (which didn't show up well in any of the pictures 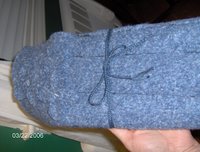 I took). The beads (on the flowers) are some seed beads which are left over from Odessa. The tie is made from DMC floss. Not the regular DMC floss, this floss was more like thin cording. I braided 6 strands of it together & then sewed it to the back (when open) of the needle case.

Yay! I was able to upload all of the pictures!! Woo-hoo!! 2 finished objects and pictures! What a great week.

Posted by AngeliasKnitting at 1:38 PM

The scarf is great but I really love the needle case. Is it on their website?

Food lessons are always welcome! I like to read about local flavor.

You must take an intarsia class.. and if you can get me some real shoo fly ple .. I will be a happy camper

That needle case came out so well! I love to hear about Lancaster-it's jsut so funny. I used to work at Turkey Hill. Great Ice cream. Just my food 2 cents. :o)

Nice FO! Can we have the cole slaw recipe?