Thank you to everyone for your well wishes/prayers/good thoughts. The weekend was pretty busy. I don't even remember if I got online at all.

Anyway. My Mom got out of the hospital yesterday afternoon. The blockage had moved & the doctor started her on real food. She didn't throw it up, so they released her. Still no word on what caused the blockage and/or how it can be prevented in the future (she's had these "episodes" almost every month, for the past 2 years - although, usually they clear up within a day or two). 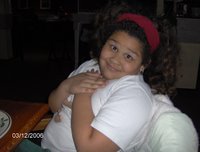 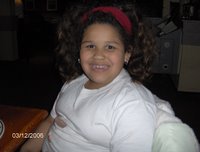 Last night, we went to the Olive Garden for the Queen Princess' birthday. That's one of her favorite places to eat. She was excited to have the servers sing to her. I have pictures of her (making silly faces) before we ate, one of her as she was being sun 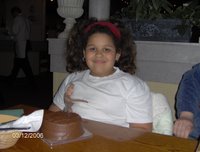 g to( with her cake from the Olive Garden) and one picture of her holding the cake I baked for her. 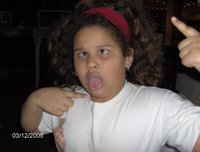 Last night I made & decorated cupcakes for the QP to take into school today. There are three kids in her class with birthdays either the 11th or 12th of March. Friday, the class celebrated the birthday of the boy (who's b-day is March 11th) and today they'll celebrate the QP's and the other girl (who's b-day is March 12th). It's funny that we (the Mom's & babies) were all in the same hospital, 7 years 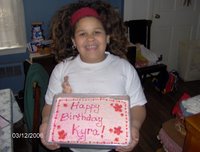 ago, within rooms of each other & now, 7 years later, the kids all attend the same school. The hospital opened up a Women's & Babies hospital the end of the year that I had the QP. When the QP was born, Maternity was still at the main hospital. That section is now regular hospital rooms - in fact, the room my Mom was just in is 2 rooms down from the one I was in when I had QP.

No knitting updates. I didn't do much knitting this weekend - except a few inches of a Prayer Shawl while I was waiting with Mom Friday as she was being admitted to the hospital.

Now, I'm going outside (it's in the mid 70's here today :-) !) to knit some endless, never-increasing stockinette stitch (the felted needle case).

MAKE it a great day!
Posted by AngeliasKnitting at 9:11 AM

Great photos of the birthday girl!

So glad to hear that your mom's doing okay. I know you must be anxious to get to the bottom of this mystery. Thanks for posting all the great pics of QP - she is so photogenic!

What great news! I did a little happy dance, and hummed a birthday tune (not a rude one, for change!) for Queen Princess... I want a slice of that cake!

What a pretty girl! Looks like she had a great day. Glad to hear the update on your mom. I hope she continues to recover quickly and completely!!

I know about that NEVER ending stockinette stitch. It's almost disgusting. :)