Not only have I learned how to add buttons to my blog, I've also found some buttons for my button stash. There are buttons I bought. These buttons were carved (I forget what they're

carved from). I found them at one of my local yarn stores. I "discovered" them not long after I decided that I need a button stash (see earlier post).

g (which still does not have handles). This button is heavy - I forget what it's made out of (I'm a wealth of information today!). I think it'll look nice with the blues, greens and browns of the bag. One of these days (soon!), I'll finish that bag. It needs handles, the button and I think I also want to try sewing (that sh 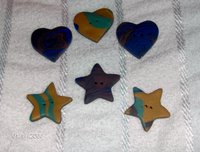 ould be interesting!) a liner.

So, with buttons on the brain, I pulled out the pack of Sculpy that I have. I bought this box containing many diff 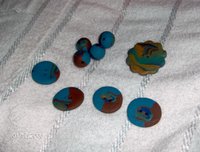 erent Sculpy colors, thinking that it would be something I'd like to do...I've never used it. Over the weekend I decided to make buttons out of Sculpy. Should be simple, right? Here are the results. I used cookie cutters for the hearts, stars and flower. For the "round" buttons, I rolled the Sculpy into a log and cut the buttons off. To get the little ball buttons, I rolled Sculpy and then used a toothpick to put a hole through the center. I don't know if you'll be able to see it on the blog, but some of the buttons I coated with (clear nail polish) to make them shiney (I think the shiney ones look much better

than the dull ones!). The picture of the 2 stars, heart and "round" button shows the shiney buttons. I'm sure there are other things one can use to make Sculpy shiney, but I'm a licensed nail tech, so I have nail polish on hand (I don't work as a nail tech, but I am still licensed).

Speaking of making things...Kimberly has been making stitch markers. Click here or here to view what she's made so far. She has recently announced that she's thinking of selling them! So, if you want some unique and interesting stitch markers, head over to her site & leave a comment to find out how to obtain some.

In other news (and this is probably the most exciting news for me!)...I heard from my Secret Pal. She has sent me a package (already!) and it should arrive TODAY!!! I'll try to restrain myslef, and not run down the driveway as soon as I see the mail truck coming down the street. Isn't my Secret Pal wonderful?!?!

MAKE it a great day!
Posted by AngeliasKnitting at 11:47 AM

Those really are neat buttons! I like your choice for the felted bag, but the ones you made turned out really cool too. Sounds like your secret pal made your day- hope it continues to be a good one!

What a great idea about buttons! I have a great stash-you can do so much with buttons, you just have to have them. I might have to make some now. Yours are great!
Thanks for posting about my markers!!

Hi Angelia! What awesome buttons! I have such a talented SP7!...have a GREAT day! Secret Pal