You may have noticed that my blog now has some buttons in the sidebar...and that these buttons are the right size...and that you can read the web ring thing? This makes me so happy!!! Thanks to Nancy and Michelle for their help with my technical deficiencies.

The Secret Pal 7 matches have been announced (they were targeted to be announced Friday but those awesome Hostesses sent the matches out today)!! I am so excited about Secret Pal 7. My Secret Pal has e-mailed me already (she's on the ball!) to introduce herself. :o) I have not e-mailed my Secret Pal yet (that is, the person I get to spoil). But I have been reading her blog...and already have some goodies planned for her.

I took some pictures today. The pix I took of the bag looked weird when I uploaded them to the computer. We'll see how they look on the blog. If they're bad, I'll take more tomorrow. 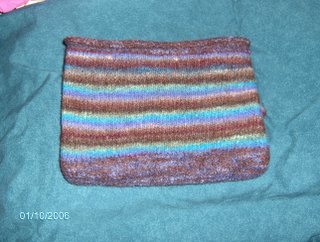 I'm still working on the i-cord (handles) for this bag. I'm also going to add a button & loop closure. This bag was knitted with a mix of yarns. I used Noro Kureyon for the body of the bag. For the bottom & the top edge, I mixed Nature Wool (blue) with Paton's Classic Merino (brown). I'm into blue & brown right now. I may actually keep this bag for myself (I haven't kept any that I've made so far). I'm not really happy with the box (size) that I dried the bag on. I don't have a box the exact size I want. I think I also want to add a lining to this bag (which should be interesting, since I'm not great at sewing!).

I mentioned in an earlier post that I'd cast on (several times!) for a hat. 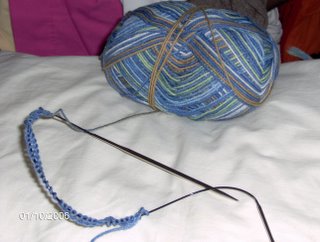 The yarn is Lion Brand Magic Stripes. It's a washable wool - self-striping. This is just the cast on row. The next rows are a k1,p1 rib. I don't like k1,p1 so I've been putting off doing any more rows (plus, if I don't do any more rows, I don't have to frog!) :o) Once I finish this hat, I want to do one for my Dad. He doesn't wear scarves. He sometimes wears sweaters - but I'm not ready to try knitting a sweater yet. So, a hat he'll get.

Can you believe my daughter will have off school Friday, Monday, Tuesday and Wednesday??? They just went back to school (from an incredibly loooong Christmas break)! Tomorrow I'll be busy arranging "playdates" for her. She's an only child & there aren't any other kids her age in the neighborhood, so she gets bored being at home. I just never thought I'd be a six year-old's Social Coordinator!

MAKE it a great day!
Posted by AngeliasKnitting at 11:36 PM

And you have a great blog!

Aarghh - tell me they haven't forgotten me (SP7) coz I haven't heard anything yet! Maybe not all of us have been matched up yet?! The bag is looking good :-)